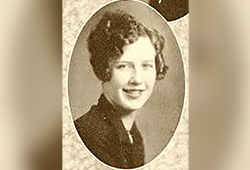 "…a faithful friend whose genuine interest in our college was demonstrated during seventeen years of unstinting service as a trustee, whose progressive policies were influential in expanding our school, whose unostentatious generosity and personal interest in our faculty and students won our love."

A member of the influential Rosenthal family, Elizabeth Rosenthal '27 inherited a legacy of community service and generosity. Her aunt, Mina Rosenthal Weil, and cousin, Gertrude, were renowned for their charity and civic activism. The most enduring influence in Elizabeth's life was her beloved father.

A prominent businessman in Goldsboro, Jonathan "Joe" Rosenthal served as a trustee for 17 years at North Carolina College for Women. His daughter Elizabeth majored in French and minored in English at NCCW during Joe's service. As a trustee, Joe supported expanding the physical education department under the leadership of Mary Channing Coleman, including the construction of both an outdoor and indoor gymnasium. One of the most advanced facilities of its kind, the latter included a swimming pool, mirrored dance studio, bowling alley and indoor golf room. Joe's death in 1927, the year of Elizabeth's graduation, was a tremendous loss to college, community, and family. In 1928, the Alumni Association requested the new gymnasium be named in honor of Joe Rosenthal.

Elizabeth upheld her father's legacy by donating $10,000 to her alma mater for a research laboratory in the Health, Physical Education and Recreation department. Her support for excellence in education was further reinforced by two professorships.

Rosenthal Professorships have elevated UNCG's academic standing through scholars in various departments, including Business and Economics, Psychology, Religious Studies, History, Education, English and Women's and Gender Studies. Research on subjects as diverse as gerontology, counseling, global information management, human development and the Digital Library on American Slavery has been supported by Rosenthal Professorships.

Dr. Robert Eason, head of the Department of Psychology at UNCG, received the first Elizabeth Rosenthal Excellence Fund Professorship in 1978. His leadership was pivotal in developing the department's graduate program and research.

The Joe and Elizabeth Rosenthal Professorships actively serve to assert the power of generosity and the timeless value of education, perpetuating excellence at UNCG.