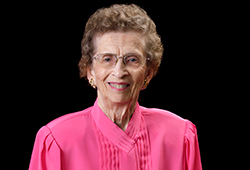 "I appreciate the personal relationships I've had, and everyone has always been so nice, from the Chancellor on down. I've enjoyed a personal connection to UNCG that lasted long after I graduated."

I remember when I decided to attend the Woman's College. I had just visited a close friend who attended there, and she was very happy with the institution. The university had an excellent reputation for producing scholars.

When I first began my education, career prospects for women were still somewhat limited. However, times were changing, and my education at UNCG led to a career in accounting. I went on to earn a master's from N.C. State before beginning a career with the North Carolina Office of State Personnel, from which I retired after serving as Director of Policy Development.

My husband, Robert Brooks, was also an N.C. State alumnus, and a professor of economics there. When deciding whether to give to State or UNCG, it was actually Robert who pushed for UNCG, pleased by the institution's student focus. Whereas other institutions are more concerned with faculty research, UNCG focused on students.

We chose to give to the Bryan School, establishing a master's fellowship, as we enjoyed the idea of supporting students who were already invested in their career goals. We chose to make our gift through charitable gift annuity because, while the money will eventually go to its chosen beneficiary, in the interim it pays a very good return, much better than a CD. It's a good investment for us.