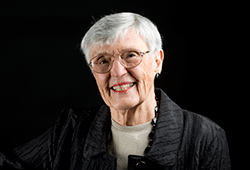 E.D. Kennedy '45
"A charitable gift annuity has proven to be a very good investment," she says. "The financial benefits have been considerable, and it has allowed me to plan gifts for the university after I'm gone. Because I was on scholarship, it means a great deal to support today's students by helping give them the same opportunity I had."

Although I grew up during the depression, it was always assumed I'd go to college and that it would be WCUNC, where my mother had attended and where I could be a town student, as I lived in Greensboro. Nevertheless, I applied for a scholarship and was turned down because I had a history of working in a store. A teacher was angered that I didn't get the scholarship and secured a private one for me from a relative of hers.

Because I was so grateful for my own college scholarships, my husband and I made what was for us a large gift to the UNCG pooled income fund - designated for the Class of '45 (50th anniversary) scholarship. Later we wanted to increase our Pooled Income Fund gift but were told we would be as well off and UNCG would be better off is we gave a gift annuity, so we did - still designating the eventual proceeds to the Class of '45 scholarship fund.

Both the Pooled Income Fund and Gift Annuity have proved to be good investments for me and I am grateful that eventually the proceeds will go to help North Carolina women majoring in some part of the humanities.

I would encourage anyone wanting to help the university while making a good investment to establish a charitable gift annuity at UNCG.